We found an effective treatment method for Canada goldenrod that works very well for small areas and reduce collateral damage to virtually nil. Once an area is treated, it helps to overseed the area. Give it a year or two before you burn or mow the area. These disturbances the following year stimulate the Canada goldenrod.

Our goal is to minimize the amount of Canada goldenrod we have. We have no illusion that we will ever eradicate it!

We use a 20% glyphosate solution (in water) and cut the flowering Canada goldenrod about waist high then dabbed the cut stems with the herbicide soaked trim brush.

Canada goldenrod dead after a month

On August 17, 2013, we did a test in a small area to see how this would work. Within a week, we were seeing results. On September 4, 2013, this is how one of those test patches looks! You can see from this picture that we would have had a lot of collateral damage with the spritzing method. 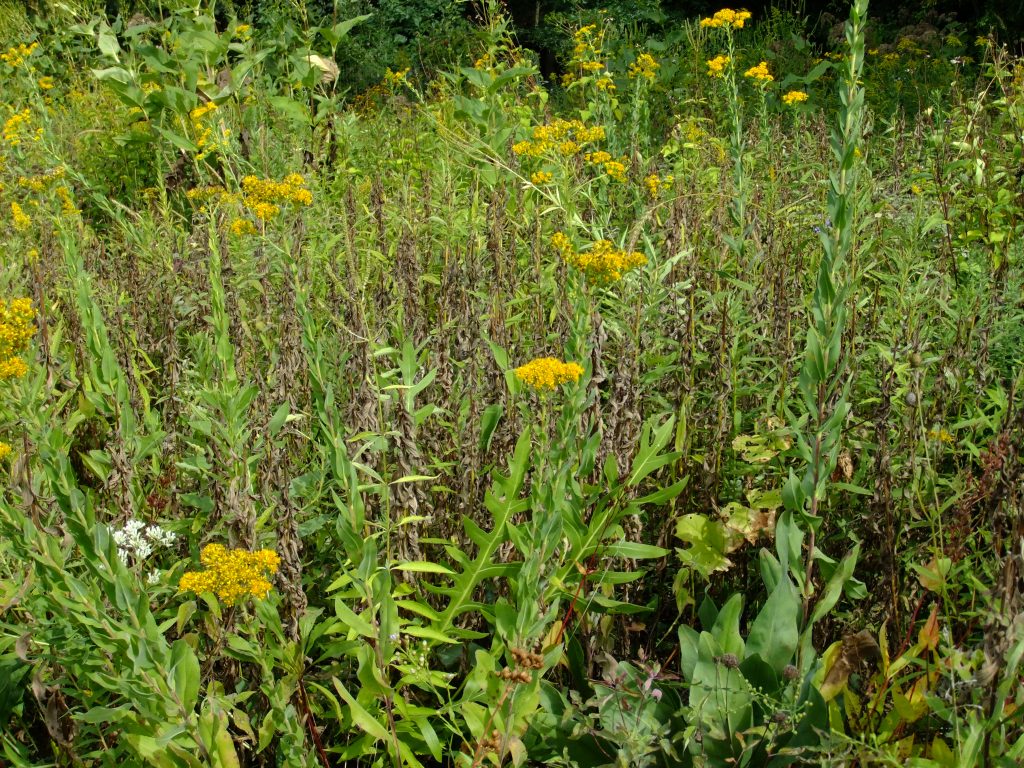 The results show this system works and minimizes collateral damage!This technique can work for a person working alone. Using a fanny pack, I was able to find a tallish screw-lid glass jar that would fit in it. I had to cut the handle of the trim brush slightly to fit inside the jar. When I wasn’t cutting, the herbicide and the trim brush were secure in the fanny pack with the lid on.

Results after one year Why we use dabbing and not spraying

Let me describe our process of arriving at this treatment. We tried cutting it with a handheld pair of hedge trimmers then spraying it with a 20% glyphosate solution but the spray caused too much collateral damage. We thought we could minimize this by surrounding the Canada goldenrod clones with cardboard and just lightly spritzing the tips with a downward angle on the bottle but you can see from the picture how much overspray occurs. I would not recommend this type of treatment.