This article details a large-scale, mowing-based approach to controlling Canada goldenrod which we have found effective through our work over many years at the Wedel Oak Woods near Argyle, WI.

Canada goldenrod grows particularly well in mesic soils, but it also can do well in dryer upland sites, especially in savanna environments where there is partial shade. Canada goldenrod spreads through rhizomes, and when areas are disturbed (such as occurs in the initial stages of restoration efforts) Canada goldenrod can invade and form extensive, dense stands that reduce long-term survival of other plants. In good growing conditions it can reach 2 meters in height, leaving very little light to reach the ground.

However, in our experience if Canada goldenrod is cut down midway through its growing season – in mid-late June – it doesn’t recover well, neither growing very high nor setting seed. This observation has formed the basis for our mitigation strategy.

We employ a relatively high mow (about 8-10 inches) sometime in mid-late June when Canada goldenrod is about 2-3 feet tall and showing signs of getting ready to put up a flowering stalk. For smaller areas, especially if the area has patches of goldenrod interspersed in areas of high value plants, we often cut by hand using a scythe.  Because Canada goldenrod has a single, somewhat brittle stalk, it is very easy to cut down by hand with a scythe.  We show our scythe in the picture below; relatively cheap antique scythes like this can often be found on e-bay.

After mowing in June, the Canada goldenrod continues to grow slowly but never gets much past 2-3 feet, and often doesn’t flower (see images below). As a result, other grasses and forbs have an opportunity to grow and get stronger over the course of the growing season. (As always, long-term mitigation of invasive plants benefits from competition from desirable species.)

If light is needed for small seedlings an earlier mow won’t hurt, but the later June mow is still required: with only a single early mow, Canada goldenrod can grow nearly as tall and thick by the end of the season as if nothing had been done.

This mid-late June mow needs to be repeated for two or three years in a row. Each growing season, the overseeded or existing desirable plants will take advantage of the weakened Canada goldenrod to become more established and grow taller. Provided that there is competition, after 2-3 years of mowing we find that the Canada goldenrod often disappears entirely, or at least become reduced to just being a widely dispersed part of the plant community. For example, many of our lowland fields were becoming nearly monotypic stands of Canada goldenrod at the beginning of our early restoration attempts 25 years ago. At that time we mowed every year for three years as described above, and since then, those fields have been largely free of Canada goldenrod with no additional attention.  See the images below for examples of first-year mowing results with this technique.

We recently saw that restoration specialists at Good Oak Restoration Services in Madison, WI have arrived at the virtually identical strategy for control of Canada goldenrod as we have. On their website they state, “Perhaps the most successful technique for control of large colonies [of Canada Goldenrod] is carefully timed mowing early in the blooming period. 2-3 years of annual mowing as well as interseeding of more desirable species can effectively wipe out a colony.” 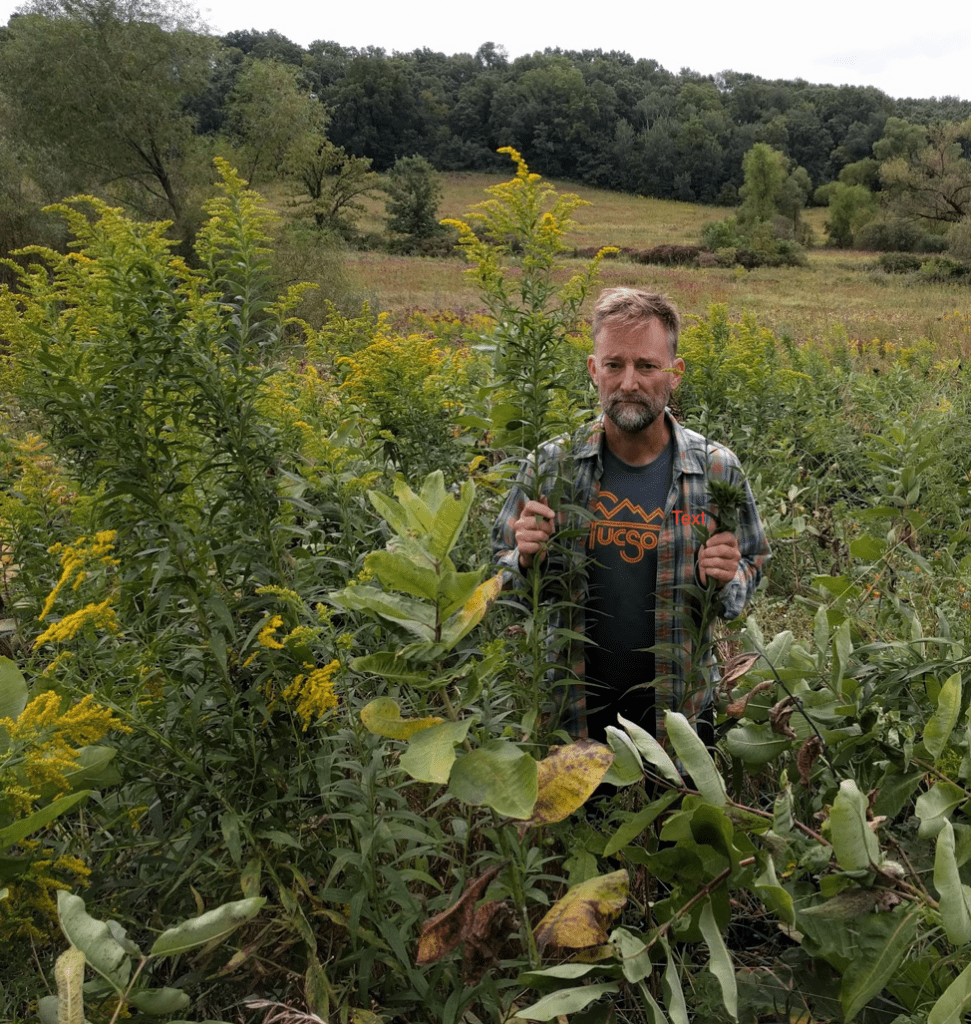 Andy showing the tall growth of untreated Canada goldenrod.The second image is of me standing in an immediately adjacent area to that in the image above. This area was likewise nearly dominated by Canada goldenrod, but we mowed it for the first time in June of this year. I am standing in a patch of Canada goldenrod that would have been just as tall as in the previous image, but note that it just comes up to my thigh and is not flowering. In addition, other forbs and grasses are visible that would otherwise have been hidden under the canopy of the goldenrod.

The third image is of my father, Tom Wedel, standing at the edge of an upland savanna field that we overseeded three years ago with an accompanying spring burn. Over the following two years, Canada goldenrod took over one end of the field. This year we mowed that end of the field in late June. The dense stand of goldenrod in the back of the image at the edge is representative of what was present the previous year in much of this end of the field. We will continue mowing this area in late June for the next few years to weaken the goldenrod and let the surviving prairie plants get stronger.