Understanding the biology and physiology of grass in management decisions

Stories of how fire affects an ecosystem can be as varied as the people telling them. These stories range from killing everything to making everything grow and all possible scenarios in between. Years ago, I decided to stop wondering which story is accurate learn the science of how “fire favors grass.”

Prescribed fire can be healthy for an ecosystem and it can have unintended consequences. With a little information, one can support the positive and avoid the negative. Here is an example that illustrates this. A 7-acre forb-heavy planting was wholly burned annually because it was believed seed production would increase. A few years of this intense burning resulted in big bluestem crowding out the forbs. The manager then wanted to herbicide the tall grass to restore the original diversity. These unintended consequences are expensive and resource-heavy because the manager didn’t understand how fire and grass interact.

Costly long-term mistakes and unintended consequences can be avoided with knowledge. Understanding the biology and physiology of grass and how these factors interact with fire explains the oft-heard phrase “fire favors grass.”  Learning this science brings freedom from relying on others and gives landowners and land managers the confidence to apply management goals specific to their land.

There are 4 grass elements that clarify why fire “favors” grasses:

The physiology (the cells, tissues, etc. and how they interact) of the grass family is one reason fire stimulates their growth.

Perennial grasses, once established from seeds, spread by rhizomes. Rhizomes are underground stems that allow shoots to grow upwards. This growth pattern makes grasses more drought- and grazing- resistant than other plants. Many grasses also have a clumping habit caused by tillers; these are additional stems sprouting from the base (aka meristematic buds). This ability to resprout from the basal area (rather than an apical tip) is why grass growth is triggered by fire (23, 25). It’s similar to woody plants that resprout. 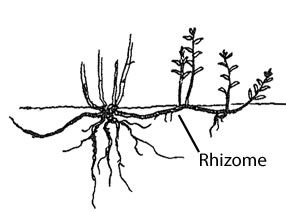 Rhizomes are nodes that grow out from the base of the plant
and produce stems some distance from the parent.

2. Physical and Chemical Composition of Grass

There are physical and chemical grass characteristics that cause them to burn easily. The small diameter, rigid stems and slender, rough leaves provides a high surface-to-volume ratio (4, 12).  Generally speaking, the higher this ratio is, the faster the fire will spread. These same features cause grass to lose moisture faster than large-leaved plants (4) which boosts their ability to burn.

Their chemical composition also adds to their combustibility. Grasses contain cellulose, silica, and other chemicals such as terpenes and waxes (3, 4, 19). Grasses use microscopic silica deposits on their leaves as a defense strategy; this makes the leaves coarse. While the waxy cuticle reduces moisture loss, it also increases its flammability (21, 24).

Prairies dominated by grasses accumulate litter faster than prairies having a diverse plant composition. Because grasses require few nutrients to flourish (18) they produce low-quality litter that doesn’t nourish soil fauna (22). When soil fauna and microbes are plentiful and healthy, they convert soil nutrients into a usable form required by forbs. Undernourished soil fauna die off leaving an uninviting nutritional environment for forbs. Additionally, the physical and chemical composition of grasses slows its decomposition rate (19) and the litter mulches out other plants. It’s as if the grasses conspire to be a monoculture!

This excess litter needs to be periodically removed by burning, grazing, or haying (2). The removal creates a cycle that increases grass growth and tillering by increasing its already high photosynthetic abilities by 60% (15, 25).

While this element isn’t a direct link to fire, it explains a basic advantage C4 grasses have over forbs and indirectly assists in understanding how grasses can outcompete forbs.

Warm season grasses are efficient users of nitrogen (N). The C4  photosynthetic pathway of warm season grasses efficiently uses nitrogen (N) because it prevents photorespiration, which in C3 plants reduces nitrogen efficiency and productivity. Photosynthesis requires the synthesis of rubisco, a nitrogen-containing enzyme necessary to fix CO2 at the beginning of the Calvin Cycle (the second stage of photosynthesis). Because photorespiration utilizes some rubisco in a wasteful manner that results in the loss of carbon and nitrogen, C3 plants need higher concentration of it to accomplish the same amount of photosynthesis as a C4 plant (7). Therefore, higher nitrogen efficiency in C4 plants is because less is being required for rubisco production (26). To illustrate this, rubisco accounts for 5-9% of leaf N in C4 plants  compared to  20-30% of C3 plant leaf nitrogen (14)

“Fire favors grass” by increasing its productivity, generally at the expense of forb diversity. Yet, like most aspects of ecological restoration, these effects vary among grass species (19, 25) with some species having received more research than others.

In Wisconsin, Missouri, Kansas, Illinois, and Oklahoma burning nearly doubled the grass stand dominated by Andropogon gerardii (big bluestem) (17, 25). A 56-year study in Kansas found a decrease in one composed mostly of Schizachyrium scoparium (little blue) (26).  “Because of their growth habit and competitive ability, tallgrasses are generally more tolerant of fire than are little bluestem and other bunchgrasses” (11).

Initial studies show species can respond differently from one geographic location to the next. In South Dakota, research found “that big bluestem production is unaffected by fire” (25).

Timing of Burns is Not Well Studied

Timing of burns and how they affect grasses has not been well studied. Based on a few research papers, the results are mixed and they appear dependent on the region. More long term research is needed.

If you decide burning in late spring is necessary, use caution to protect the wildlife. After 3 days of 50 degrees or higher, our native reptiles and amphibians are out of their winter nests and fire can lead to their mortality. While you might not see the dead or injured ones, don’t discount this possibility. Click here for more info on management for herptiles.

“Fire favors grass” from the physiological science and the biological science. The physical nature of grass growth provides the fuel-to-air ratio needed to carry a fire and produces litter amounts to sustain a fire. Biologically grass contains chemicals to encourage burning and grasses can efficiently use the air-born nitrogen created by burning. While all grasses have these characteristics, each species may respond to fire differently.

Combining your goals for your land with some basic science of restoration work can prevent unintended consequences. Overuse or misuse of fire as illustrated in the initial example can be prevented by learning the science. Fortunately, there are various management techniques at our disposal. Keep the options to mow, graze, and hay in your toolkit.